Last price update was: September 17, 2021 7:37 am
× Product prices and availability are accurate as of the date/time indicated and are subject to change. Any price and availability information displayed on Amazon at the time of purchase will apply to the purchase of this product. 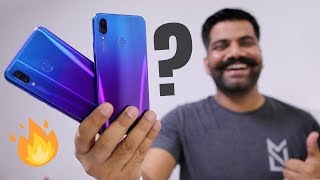 The Chinese smartphone company Huawei launched a new mobile phone. Huawei Nova 3i featured with GPU Turbo which increases GPU performance up to 60% and reduces battery consumption up to 30% to give an immersive gaming experience. In addition, mobile also has an Enhanced AI feature and 360 Degree Face and fingerprint unlocking.

The mobile has an FHD+ IPS display with 1080×2340 pixels and a 19.5:9 aspect ratio. The smartphone runs on EMUI 8.2 and powered by Kirin 710 Octa-core processor. The Nova 3i paired with 4GB RAM and 128GB Internal storage.The Nova 3i 16+2MP Dual rear AI camera with 22 different scenes to deliver memorable pictures. In Front dual AI camera of 24+2 MP  with 8 different scenes with real-time optimization supported by 128GB memory. In addition, the camera also has features like HDR Pro and super slow motion.
The Huawei Nova 3i is a dual sim smartphone with dual-standby (4G+4G). Huawei has loaded this phone with some pre-installed software like HiCare, Health, AppGallery, Video, etc.
Furthermore, the Huawei phone loaded a 3340 mAH lithium Polymer battery. The Phone also has new features 3D Qmojis learn and animate your expressions & voice to generate personalized Qmoji GIFs or videos.

1 review for Huawei Nova 3i

Add to compare
Deal of the day

Grabfly is a trusted e-commerce affiliate website. We work on providing information  about  all  the latest gadgets launching in the tech- market. Grabfly shows reviews about various products and updates which are trending in the market these days.